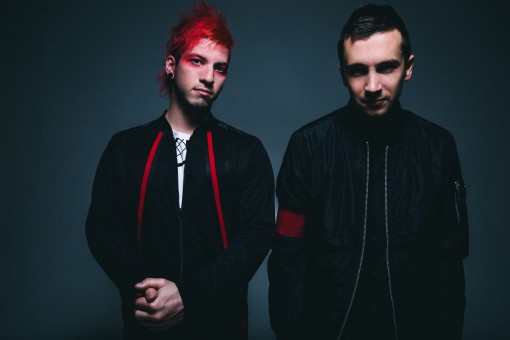 Live Nation Lushington is proud to announce TWENTY ONE PILOTS “BLURRYFACE TOUR”. Performing live in Singapore for the very first time, the American alternative music band will bring their phenomenal live show to the Suntec Convention Centre, Hall 401-402 on 16 July, Thursday. Tickets will be available via all Sistic and
ApacTix channels on 2 June 2015 (Tuesday) 10am onwards. Limited Early Bird tickets at $78 with Standard tickets at $98. Tickets at the door will be $108.

Twenty One Pilots, one of the most buzzed about
bands of 2014, have debuted their new single “Tear In My Heart” taken from their eagerly awaited sophomore studio album, Blurryface, out now. Today fans can also watch the official music video for “Tear In My Heart,” with the standalone single available via iTunes. The announcement follows the release of ”Fairly Local” which debuted at #8 on Billboard’s Top Rock Songs chart with the companion music video amassing upwards of 2 Million views on Fueled By Ramen’s official Youtube channel.

The album Blurryface was released on 19 May. After their 20 May performance on Jimmy Kimmel Live, the duo set out on the Blurryface World Tour opening with dates in the UK in May followed by North America this Fall. In only one record cycle Twenty One Pilots have grown astronomically, emerging from clubs to main stage festival appearances. The band’s 2014 “quiet is violent tour” reached sold out audiences around the world including London, Amsterdam, Paris, Tokyo, Sydney, Mexico City and more. The band is also set to perform at a myriad of summer festivals around the world including Lollapalooza.

The duo that is Twenty One Pilots – Tyler Joseph and Josh Dun – has earned widespread applause for their energetic live sets and distinctive fusion of piano-driven schizoid pop and lyrical uplift. No strangers to the road, Twenty One Pilots has built a fervent national following via their electrifying live performances at innumerable headline shows and tours. The band made its Fueled By Ramen debut with a new EP titled Three Songs released Summer 2012 and was followed by a full-length album titled Vessel. From Columbus, Ohio and formed in 2009.

They put out two self-released albums, Twenty One Pilots in 2009 and Regional at Best in 2011, before being signed by Fueled by Ramen and releasing Vessel with Twenty One Pilots’ meteoric rise since the release of Vessel saw the band named an MTV Artist To Watch, and give unforgettable live performances at the 1st annual AP Music Awards, 2014 MTV Movie Awards and Late Night with Seth Meyers. Named #1 in Alternative Press’ 10 Essential Albums of 2013, Vessel continues to gain momentum with the highest selling week for their album occurring recently at the end of their two year album cycle, and over 300,000 copies sold, and over 1,000,000 singles sold to date.

Twenty One Pilots is all set to heat up the live music scene in Singapore as they bring their special blend of alternative, rock, rap and electronic music to the Suntec Convention Centre. Fans can expect an upbeat and exhilarating show from this buzz-worthy act. Discover them before everyone else does!