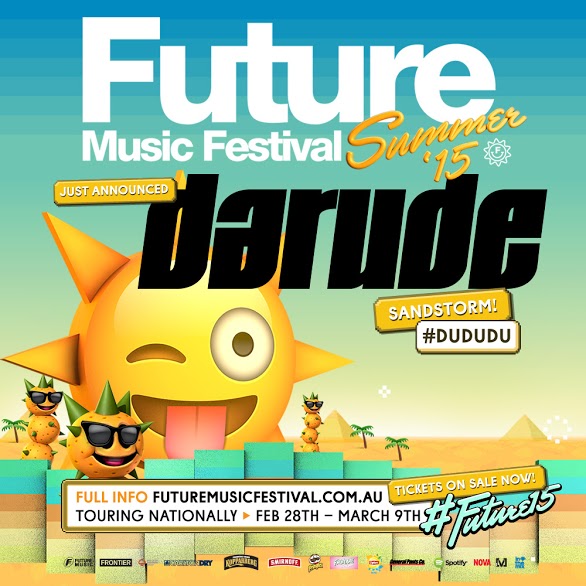 He set the benchmark for modern dance producers, releasing the smash hit ‘Sandstorm’ back in 1999 and selling over 2.5 million copies, the track featured on over 300 compilations. Fifteen years later, he’s still setting crowds alight, with Peking Duk dropping ‘Sandstorm’ in live sets and triple j’s Matt and Alex celebrating his name. Future Music Festival is thrilled to announce a brand new addition to our 2015 line-up: the one-and-only Darude!

“Darude should get an honourable mention” – deadmau5

Recognised by DJ Mag as “Finland’s biggest musical export”, Darude (Ville Virtanen) hails from Hinnerjoki, but has for many years lived in Atlanta (USA). He recently saw his iconic track ‘Sandstorm’ storm back into the Aussie charts, ‘Sandstorm’ hitting #18 on the Australian iTunes chart with thanks to name checks from Peking Duk and beyond. The legendary producer is so popular that a local Pozible campaign was launched in November (by Noisey/Thump writer and rap squat aficionado Rei Barker) to bring Darude out on tour… check it out here. Rei, you’ve got your wish!

“I am anxiously awaiting my return to Australia!” says Darude. “It has been WAY too long. My previous Australian shows have been great, full of wild and crazy party people. The Aussies in general are such nice people and I can’t wait to see everyone out on the Future Music Festival tour! Which artist am I most excited to tour with? It’s hard to pick only one, but my all-time favourite has to be The Prodigy. I’ve seen them live as a spectator, and now I’m so excited to be sharing a stage with them! See you soon Australia!”

While Darude is responsible for releasing the world’s best selling 12″ vinyl of 2000, he’s also one of the most well-travelled DJs out of the US – clocking over 140,000 miles annually. Darude recently wrapped up a world tour in support of his brand new remix album, Salmiakki Sessions Vol 1 and is working on his upcoming fourth album.

Salmiakki Sessions is a reflection of his monthly radio mix show, which has been broadcast online and via FM stations around the world since 2005 – check it out here. “I was constantly dancing or at least bouncing and nodding in the studio when I was working on this mix,” says Darude of his latest production, which includes up-and-coming local Finnish talent. “I’m really excited to have such a strong track-list for my first ever DJ mix compilation and it makes it even sweeter that I’ve got my Finnish buddies with me on it!”

Darude first leapt to fame back in 1999 when ‘Sandstorm’ topped charts worldwide – #1 in Norway for 17 weeks and reaching the top 10 in most European countries. He followed that up with club smash ‘Feel The Beat’, which appeared on his acclaimed 2000 album Before the Storm, earning him three Finnish Grammy Awards. He’s sold over five million records worldwide to date.

With a legendary status and long-terms success, Future Music Festival are excited to welcome Darude down under! Catch Darude joining the Future party alongside such Drake, Avicii, the Prodigy and many more this summer!  Tickets are on sale now.

*line-up may vary from city to city – check website for full info.FUTURE SUMMER ’15: