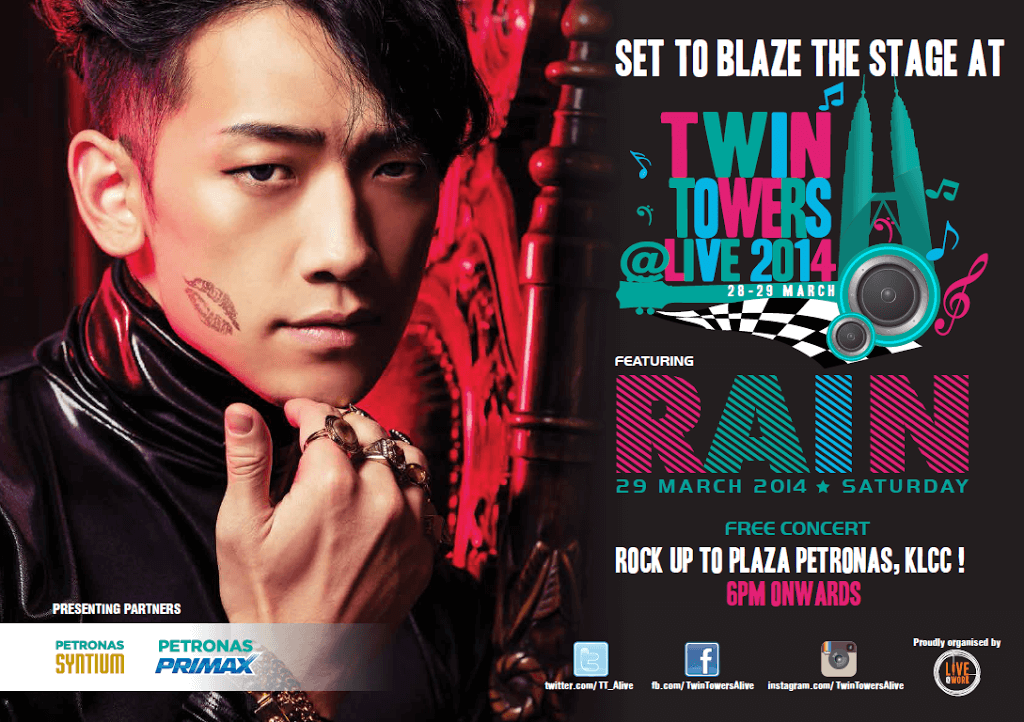 ‘RAIN’ SET TO BLAZE THE STAGE AT TWIN TOWERS @LIVE 2014!
KUALA LUMPUR, 29 Jan 2014 – Local K-pop fans will have plenty of reasons to rock up to Plaza PETRONAS, KLCC as RAIN makes a triumphant return to the live music scene. The Korean superstar is the first of a series of artists to be announced for the annual extravaganza.
He will be performing on Saturday, 29 March 2014, the second night of the two-night Twin Towers @Live 2014 concert. Rain represents the next in a long line of Korean icons to have made an appearance at the concert, after Girls’ Generation, 2NE1, Wonder Girls and U-KISS. 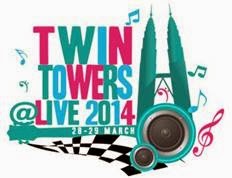 Twin Towers @Live has made a name for itself in the Malaysian calendar of events for bringing in artistes sure to suit everyone’s beat, from rock (Hoobastank and Orianthi) and R&B/dance (Kelis) to house (DJ Tatsuro and DJ Face). Head turning performances by Demi Lovato and Backstreet Boys last year remains fresh in the minds of the attendees.
Rain, otherwise known as Jung Ji-Hoon, is one of many responsible for
heralding the Hallyu Wave that has swept the globe. Stepping foot into the
music industry with debut album “Bad Guy”, his slick dance moves and
smouldering good looks quickly won fans over in his native country.
But it was not until his lead role in KBS drama “Full House” that his talents
found an international audience. Since then, this prolific star has dropped four
studio albums, featured in four television series and conquered Hollywood
with two films.
After a two-year hiatus that saw him enlist in compulsory military service, Rain
showed he has not lost his edge with the release of “Rain Effect” earlier this
year. He is expected to play the double lead singles “30 Sexy” and “La Song”,
along with a combination of newer material and greatest hits.
Plaza PETRONAS, KLCC will prove to be the perfect setting for Rain’s
comeback, having played host to a bevy of world-class events the likes of the
national New Year’s countdown celebration and Earth Hour. Its landmark
attraction, the PETRONAS Twin Towers, is a constant magnet for millions of
admirers.
Twin Towers @Live 2014 is a FREE concert and open to all members of the
public. Its Presenting Partners are PETRONAS Primax and PETRONAS
Syntium.
Twin Towers @Live 2014 is organised and managed by Live At Work Sdn
Bhd.
Visit our social media below and stay tuned for more amazing line-up for the Twin Towers @Live 2014.
https://www.facebook.com/TwinTowersAlive?fref=ts
https://twitter.com/TT_Alive
http://instagram.com/TwinTowersAlive