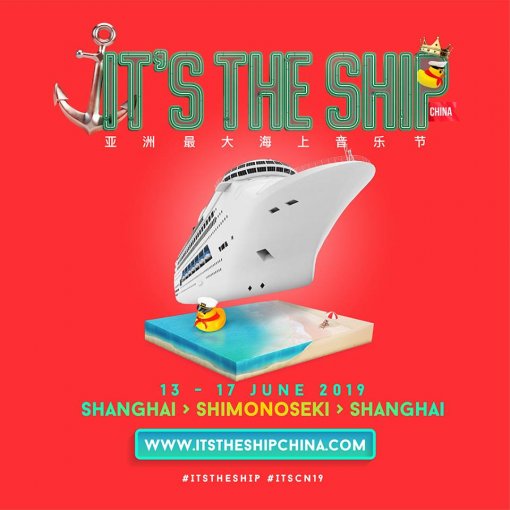 Asia’s Largest Festival At Sea – IT’S THE SHIP (ITS) is setting sail into the China sea for the very first time in partnership with Chinese Music World (CMW). With its first voyage setting sail in 2014, IT’S THE SHIP now boasts an international community of 117,000 shipmates and still counting from over 88 countries including Singapore, Japan, Thailand and Australia. This summer, IT’S THE SHIP CHINA guarantees its shipmates with an epic festival experience with non-stop music and amazing themed parties that promise a thrilling escapade! Representatives from world-renowned international EDM record labels such as SPINNIN’ SESSIONS, BARONG FAMILY, MONSTERCAT, LIQUID STATE and Asia’s leading music labels, HARDSTYLE ALLIANCE and JUNGLE EVENTS were also present at the conference in support of o ciating IT’S THE SHIP CHINA. The revealing of the first phase line up of IT’S THE SHIP China was announced at the press conference along with 3 main stages and 4 themed parties that will take place across the 5 days, 4 nights adventure. The o cial after-party, ‘First Voyage Night’ was held at BALLERS, 158 Square, Shanghai Julu Road on the same day, 9PM, added a unique highlight to end the conference. 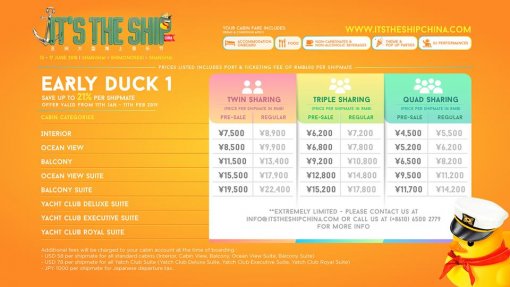 The early duck promotion is now open, o ering shipmates up to 21% discount on the cabin price until 7th of March 2019. Cabin prices are inclusive of complimentary 20-hour dining, selected non- alcoholic beverages and free usage of most of the ship’s facilities. Don’t miss out on this promotion by purchasing your early duck cabin now at www.itstheshipchina.com.

Asia’s Largest Festival At Sea – IT’S THE SHIP is setting sail from Shanghai to the Japanese island of Shimonoseki and back this 13th to 17th June 2019. Shipmates can expect an epic show of a round the clock music festival experience aboard the MSC Splendida across five days four nights continuously.

Be ready to get onboard the exclusive eco cruise ship, MSC Splendida for an epic 5-star experience with luxurious comforts, designer-themed dining options and a multitude of facilities which includes four swimming pools, a squash court, and a bowling alley that awaits guests as they experience Asia’s largest festival at sea for the first time in China. Shipmates can expect to run into their favorite artists anytime, anywhere onboard as IT’S THE SHIP China features a range of artiste-led side activities, as well as costume themed & private parties, and many more surprises in store! In the past five years, IT’S THE SHIP have featured a multitude of international artists including Knife Party, Yellow Claw, David Hasselho , Higher Brothers, Far East Movement and many more. Marking its sixth sail, IT’S THE SHIP China will be no di erent as it promises to o er shipmates a one-of-a- kind experience with non-stop music, exciting activities and quirky themed parties.