Daughtry will bring arena-style rock to Kuala Lumpur, performing some of their popular hits including “Home”, “It’s Not Over”, “Feels Like Tonight”, and their newest single, “Backbone”.

As the frontman for the band bearing his name, Daughtry has become one of the most visible and consistent rock & roll torchbearers of the 21st Century. Since rising to prominence on the fifth season of American Idol, he has released four albums, all of which reached the Billboard Top Ten and have a combined sales over 8 million copies in the U.S.

One thing that has kept the fire burning for Daughtry has been the need to constantly challenge himself creatively. He has collaborated with artists from Timbaland to Vince Gill to Carlos Santana and took on the role of Judas Iscariot in the 2016 live television performance of The Passion, and even fulfilled a lifelong dream by drawing the cover of a Batman comic which was rated as one of the top 25 covers of the year by BatmanNews.com.

Daughtry will be performing in Singapore, Malaysia and Thailand on their Asian tour. Malaysia ticket sales will begin on the 21st May 2018 from 10am onwards. Early birds are entitled to a special rate of RM 258 only, limited quantity and on first come first serve basis only.

Don’t miss out on your chance to rock with Daughtry! 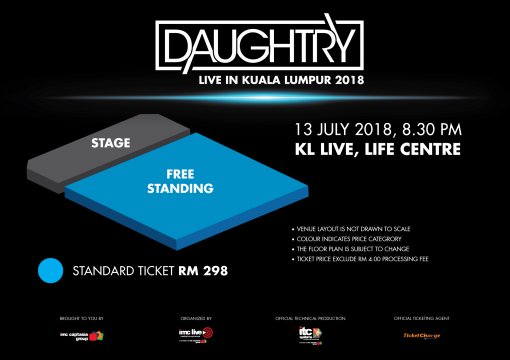