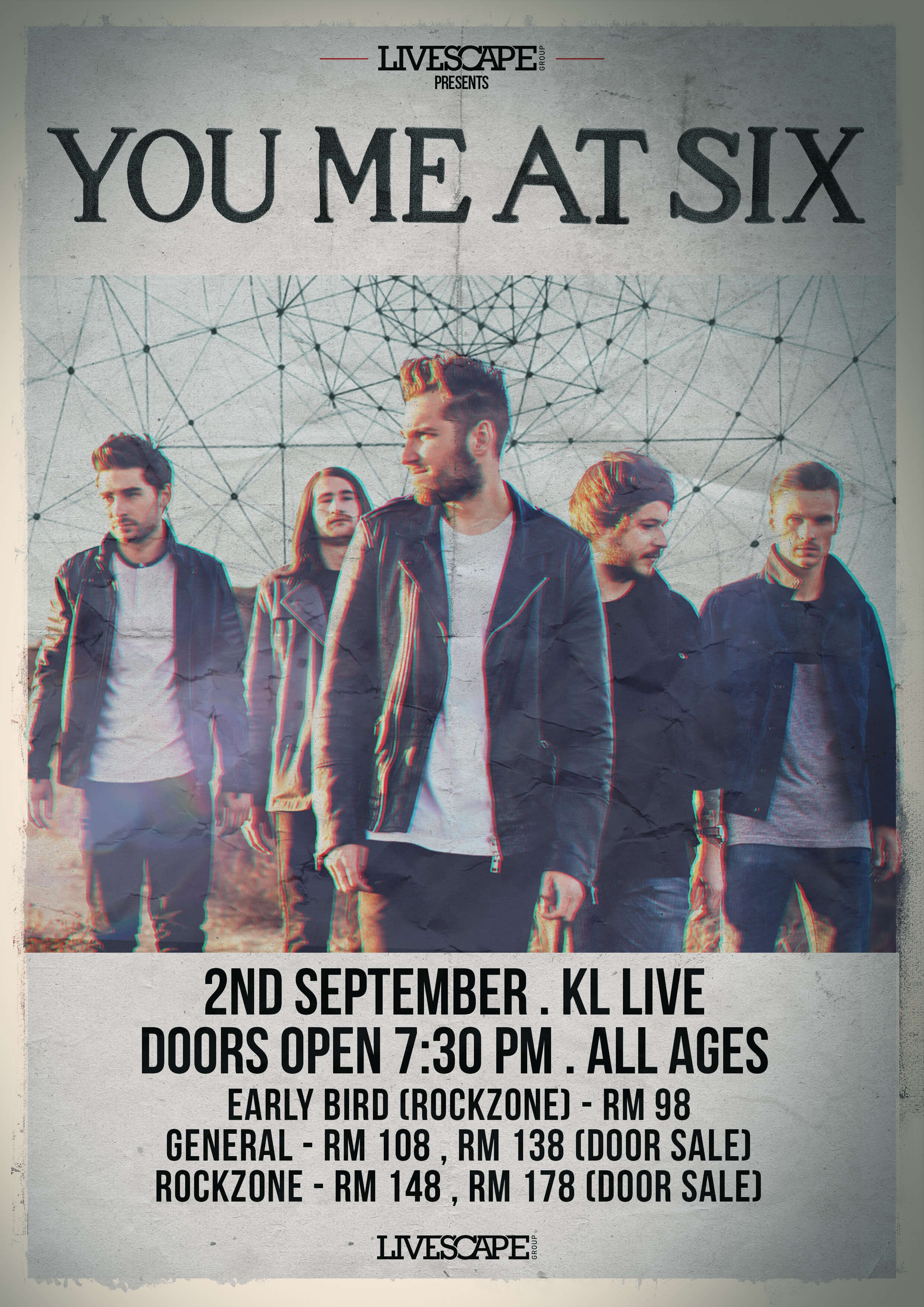 YOU ME AT SIX LIVE IN KUALA LUMPUR!

British rock band, You Me At Six, set to perform live for the first time ever in Malaysia on September 2 at KL LIVE, Kuala Lumpur.

You Me At Six will be heading to Malaysia on September 2, performing for the first time ever in the country at KL LIVE. Organized by Livescape Asia, the one-night-only show is set to attract over 2,000 fans.

The five piece alternative, pop rock band from Weybridge, Surrey, was formed in 2004 before they shot to fame in 2008 with the debut of their first album, Take Off Your Colours. Singles from this album include “Save It For The Bedroom”, “Finders Keepers” and “Kiss and Tell”. The singles “Finders Keepers” and “Kiss and Tell” peaked on the UK Singles Chart at No. 33 and No. 42 respectively.

After the success of their first album, the band released their second studio album in January 2010 titled Hold Me Down which reached number 5 in the UK. Singles from this album include “Underdog”, “Liquid Confidence” and “Stay With Me” which was released in September 2010. The song peaked at No. 53 in the UK Singles Chart. Their third album, Sinners Never Sleep, was released in the UK on October 2011 and in January 2014 the band released their fourth studio album, Cavalier Youth.

You Me At Six consists of four original members who formed the band in 2004 which are Josh Franceschi the lead vocalist, Max Helyer who plays the rhythm guitar and sings backing vocals, Chris Miller the lead guitarist and Matt Barnes who plays the bass guitar. The newest member is Dan Flint who joined the band in 2007, before the debut of their first album. He plays the drums and percussions.

You Me At Six Live in Kuala Lumpur will take place at KL LIVE, Life Centre on September 2. Limited early bird tickets are priced at RM98 (Rockzone). The rest of the tickets to the show are priced at RM108 (General Pre-Sale), RM138 (General At-The-Door), RM148 (Rockzone Pre-Sale) and RM178 (Rockzone At-The-Door). Tickets will be available for sale on 1 August via http://www.ticketpro.com.my/. For more information or to obtain updates on the You Me At Six show in Kuala Lumpur, logon to https://www.facebook.com/rockawayfest.